Sandy Symeonides has been a dedicated and passionate scooterist for the last 28 years. Sandy has worked in Chicago USA 1994 -96 and in east London UK 1997-2004. Upon his return he worked in numerous scooter workshops and helped establish a custom motorcycle brand. After realizing that he could offer more to the community by opening his own business,  Sandy established SS Scooter Engineering in 2005.From day one of opening his doors, SS Scooter has produced some of Australia’s finest and most decorated, but above all world-class Vespas and Lambretta restorations. He gives generously to all scootering events, particularly to the National Classic Scooter Rally’s, where we have seen him ride his restorations in the day and cutting up the dancefloor at night. He participates regularly in the Australian Classic scooter Mille on his GS 160 with Team GS, and competes in the Motorgiro.  Sandy currently owns two Lambretta’s; a Vega 75s and a TV200.
​
But his business also reaches out to the wider community, and utilizes his position as a White Ribbon ambassador to help end violence against women and violence in all its forms. He also works closely with Beyond Blue and has been pivotal in his role in helping the homeless in the inner West of Sydney with the establishment and funding of many soup kitchens, and Youth of the Streets.   As such, it is not surprising that Sandy has also gained a cult following not only  as a fine restorer, engine builder and tuner, but is widely respected for his integrity and skills  amongst his scootering peers in Australia, but his influence and reputation of integrity, passion, skill, honesty, high-mindedness and dedication reaches worldwide, beyond the workshop doors.

Hi all, I’m a South Australian Scooterist, my obsession with scooters started with my influential older brother having another brand of Italian scooter and couldn’t believe how cool it looked.
That was until I saw a Lambretta, and that was it, the affliction of Lambretta obsession had begun.
It all started with an LD in the early 90’s and I’m currently riding a 1958 Framebreather, with a few regretful sales in between and very slowly evolving D125 project. I love the restoration process and also interested in the history of the Lambretta in Australia.
One of my best experiences on a Lambretta was doing a 5 day trip around Tasmania a few years ago, so I’m really pleased to be part of the committee with the rescheduled Tasmania National Rally. Next year for sure!
I look forward to getting involved in keeping this great club going. 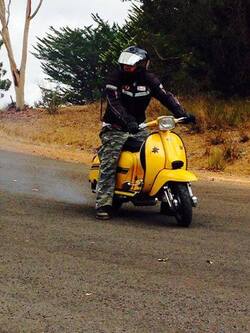 Hi my name is Max, I'm the current Secretary of the Club but have also served as President, Vice-President and Ordinary Member, before that I spent a couple of years on the Paradise Lost SC committee. I'm a relative newcomer to the scooter scene getting my first Lambretta in 2007. I love all of the Lambretta models but have a particular soft spot for the muscular styling of Bertone's DL/GP and currently have two downstairs. I like to know how and why the machines are working...or not, so enjoy getting the tools out. I am also a fan of longer rides and have participated in four tours of the south west of WA, as well as helping to organise the route for the 2016 Australian Classic Scooter Mille, and organising the inaugural 2017 West Coast Lambretta Jamboree.
​

I started my scootering career in the UK in the early 1990s, quickly deciding that I’d better get my own license as I didn’t like being a pillion.  I’ve owned big wheels (Ducati, Triumph) and little wheels (Lambretta and Vespa) and loved them all, although my current favourite is my Series 1 Framebreather.

Attending the UK scooter rallies gave me a love of road trips and I have since ridden thousands of kilometres round Europe, India and Australia.  The ride across the Nullarbor to the Fremantle Australian National Classic Scooter Rally in 2011 was a particular highlight.

I’ve been Canberra-based for the last 15 or so years.  I think there’s an illness you catch when working in a public service town – an impulse to give back to the community.  In my case, I directed my time towards the two-wheeled community.  I served as Secretary of the Motorcycle Riders Association of the ACT for eight years and on the Committee of the Australian Motorcycle Council, two advocacy groups who until that point didn’t really consider scooter riders as part of the riding community.  They know an awful lot more about us now!

I’ve also contributed to the scooter community in Australia generally by being part of the organising group for the Australian Classic Scooter Mille, the National All-Inclusive Rally in Jindabyne NSW and the inaugural Australian Lambretta Jamboree in Canberra.
As this year’s Treasurer for the LCoA I bring 20+ years’ experience as a Chartered Accountant to the role.

A late comer to riding scooters, I didn’t start riding until the mid 2000’s. Fortunately I was immediately introduced to a great group of people, who are now my club mates and friends and we’ve been on many adventures, far and wide. After having Vespa’s for years, I finally decided a slimline Lambretta would go nicely in my stable and I purchased a 1963 Series 3 Li 125. Restored on the inside and set up for touring, it’s been a very reliable Mille machine.

I’m Victorian born and bred and been living in Melbourne for the last 35+ years. I’ve served on many sporting committees in the past and hope that some of that knowledge, along with my IT background, will be of some assistance to the LCoA.

Most people think that I fall off my Lambretta a lot... well ... maybe just a bit....
​
​When the club cried out for people to put their hand up for positions on the committee, I thought why not... time to give a little back to this great club, which has supplied too many great memories for me - all of the Australian Classic Scooter Mille events so far ( although completing more than just one is something I would love to remedy ), the East Coast Jamborees and the other events that the club provides support & insurance for.